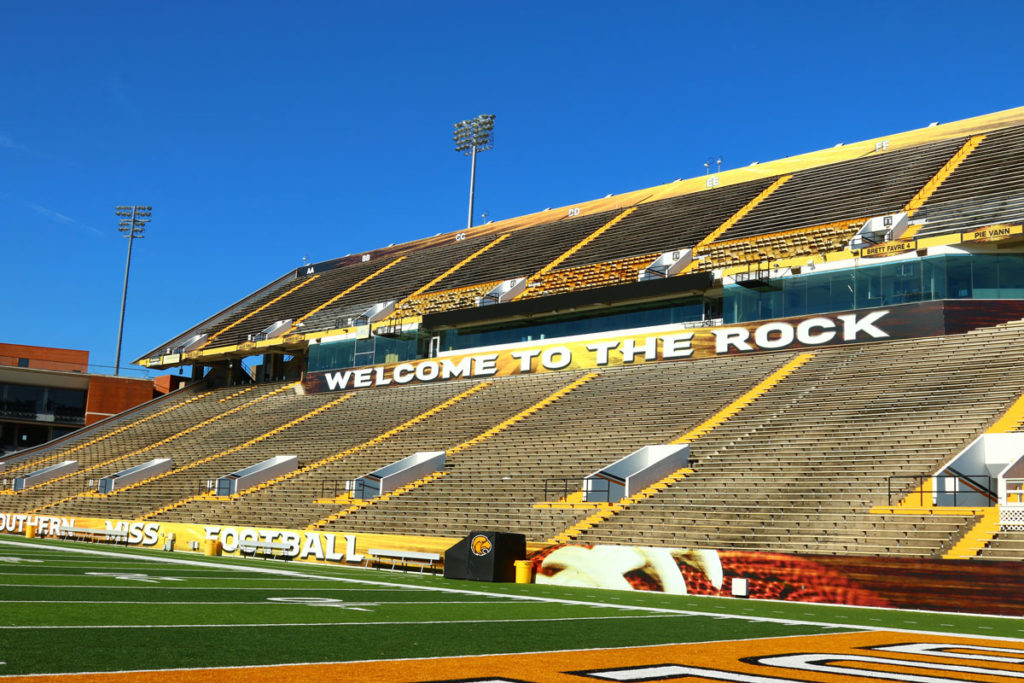 M.M. Roberts Stadium, or better known as “The Rock”, is an American football stadium located in Hattiesburg, Mississippi. It is the home of The University of Southern Mississippi Golden Eagles football team.

The Rock was originally opened on October 29, 1932, as “Faulkner Field”. Back then, it was just a wooden grandstand which held 4,000 spectators. It was originally named after local businessman L.E. Faulkner, who financed the materials and equipment for the stadium. Additionally, the field was built for free by local unemployed workers during the Great Depression.

Later, in 1938, permanent concrete stands which also housed dormitory space for student-athletes were built on the east side of the field. It was built with the help of Southern Miss football players hauling the concrete and thus, the stadium received the nickname “The Rock”. Although the term is usually in reference to prison work crews, none were used to build the stadium.

The stadium was expanded again in 1950 for $350,000 the 7,500-seat West Stadium Dormitory stands were built. Later, additional 2,000 bleacher seats were installed, as well as new lights (the stadium had lights as early as 1934), and a new scoreboard. By the end of this expansion, the stadium’s official seating capacity increased to 15,000.

In 1974-76, the stadium was rebuilt at a total cost of $6.3 million, with two sets of double-decked grandstands constructed on both east and west stands. The design brought seating capacity to 33,000. The stadium was renamed for M. M. Roberts, an alumnus of then-Mississippi College and member of the Board of Trustees of State Institutions of Higher Learning. He helped to build the school up to its current university status, the largest of such school in Mississippi south of Jackson. The new stadium was opened on September 25, 1976, with a loss against in-state rival Ole Miss.

In 1989, the current press box was added. Other improvements to the stadium include the Southern Miss Athletic Center, a field house, and athletic training facility which opened in 2002 in the north end zone. New lighting towers were added for enhanced lighting of televised games, and, the new Momentum Turf field was added in 2004.

The playing field at Roberts Stadium underwent a name change in the summer of 2004. It was renamed Carlisle-Faulkner Field at M.M. Roberts Stadium in honor of entrepreneur, Southern Miss graduate, and Golden Eagle supporter, Gene Carlisle, who provided outstanding support and contribution to the Athletics Department and the University. Much of the contributions went to the installation of a new playing surface, Momentum Turf.

In 2008, more additions to the stadium that encloses the south end zone, adding nearly 4,000 seats, and 33 specialty suites were opened. The expansion included luxury boxes as well as a new scoreboard in the North Endzone. Premium seating and a club level on the east side of the stadium were added too. The Pride of Mississippi Marching Band now sits in the new expansion of the south end zone.

For more information on the M.M. Roberts Stadium at The University of Southern Mississippi please read these additional pages:

Ticket Policies:
Read about our ticket guarantee and refund policies.

Read up on tailgating rules at the stadium and surrounding areas.

Sign up for our newsletter and get $5 off your first order!
You will also recieve a monthly “What’s On Guide” to your email!